On Being Connected… I hope you had a good thanksgiving day feast. It’s weird how 3 days of cooking is over in 30 – 45 minutes. Then don’t forget about the two days of post Thanksgiving Dinner clean up. There’s always a football game to watch or trouble to get into if you bring up the wrong topic. But the being connected part in those few minutes that makes the whole thing worthwhile.

I have a cool laptop. It’s not the latest and was never the greatest but the darn thing works really well despite a few annoyances. Funny thing is though if I don’t charge the battery or keep it plugged in, it dies. Dead, kaputski, over and out.

In my recent study, I’ve learned that we are actually very similar to batteries. You think about Tesla batteries and the combination of chemicals that allow the holding of electricity. Our bodies are not much different. Slightly different chemicals, but we hold a great deal of electricity in our bodies. We can hold a charge and dispense energy with gusto for a certain amount of time. But if we don’t recharge (sleep, meditate, relax) and resupply (eat, drink, breathe, absorb sunlight) then we will shut down. Until we plug in again.

This may surprise you but we are all munching on sunlight, every meal and snack. It all starts with the sun. The light and heat that bathes our planet causes photosynthesis which creates sucrose which in turn becomes fat. Every being and every animal or plant we consume is bringing sunlight into our bodies. By exercising, we expend energy that creates a vacuum for more. If you don’t exercise your capacity to absorb energy atrophies (gets less and less).

So walk, ride, row or jump or skip. Often. If batteries sit on a shelf and are not used they die. Don’t let it happen to you. 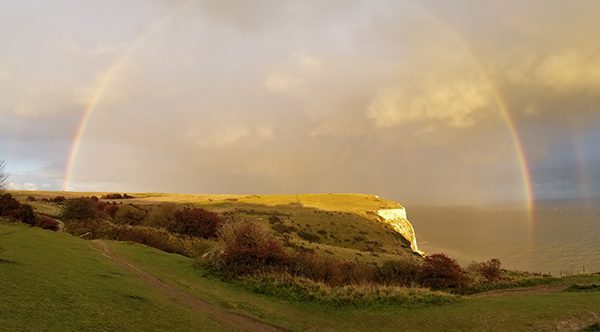 Epicurious said, “Do not spoil what you have by desiring what you have not; remember that what you now have was once among the things you only hoped for.” We had some good thanksgiving around the table. My daughter announced $3500 in scholarships won for her semester abroad coming up early next year. I expressed thanks for our recent trip to the UK which with some random good fortune, I was able to take this photograph. I wish I had raised the angle of the camera about 3 degrees so the top of the rainbow would have been in focused too. But I saw it with my own eyes, so it’s buried in my brain somewhere. Glad I could share this with you. The White Cliffs of Dover has the busiest passenger port in the world with ferries leaving and arriving from France throughout the day.

Being healthy: Whatever the amount of health you have today is worthy of gratitude. If you can read this then you have today is enough to say Thank You. It’s been expressed to me by my oldest son that he’s thankful that I am healthy. I am at the age that the obituaries are starting to become morbidly interesting to me. Who am I outliving? I’ve outlived some billionaires who are my age. You would think that they, those 1%ers, have nothing to want for, have the best medical care, best environment that money can buy. But it’s not true. Once you have a moderate amount of security, it’s best not to worry about money and find something to do with your life that is meaningful in a positive way rather than creating unhappiness with life through tortured thoughts. Keep positive, give thanks always.

Favorite public speaker at the moment: Professor Johnathon Haight – Professor Haight brings oxygen into the room of awareness by exposing the lack of tolerance of diversity in political life… I am a amateur student of history and like to view the happenings in  today’s world through a lens of history. We think we are living in uniquely difficult times but a simple scan of history proves otherwise. You can google the name and find many videos over the last 15 years in which Professor Haight shows an underexposed side of controversy with academic precision. Answers are available if we can ask the right questions.

Have a wonderful weekend.