Today is my birthday. Completing 66 revolutions around the sun. In fact, I just past the exact same spot the planet was 66 years ago at 10:15am. My 85 year old mother just called. I asked her if she remembered what she paid for my birth at Walter Reed Army hospital. $3.75. Mom was 19. Newly arrived to the States from Vienna. She had survived Hitler, the war, concentration camp (Maly Trotstinets, Minsk), seven years “orphaned” hiding out in the forests of White Russia. Through some miracles of meeting a German officer who was begging for bread, small mercies of said officer to carry her real name with him back to Germany after the war, the Red Cross International Broadcast, my aunt’s contacts with the wife of Avril Hammond at a boutique in Washington DC, mom was able to be reunited in Vienna with her father who also survived. My mom was one of the few people that got a plane ride home to Vienna from Moscow after the war. Most people had to walk home. Mom morphed from peasant girl to urbanized woman in six months. 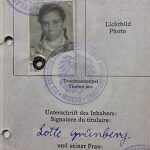 The USS Eisenhower carried my seasick mom to Ellis Island. Within a year she had met my dad in a People’s Drug store at the coffee counter, and on December 15, 1953, I show up 6lbs and 2oz. Mom says I was a skinny kid until puberty, then I gained some weight. I remember needing size ‘husky’ at some point along the way. Now fast forward, this past year has been eventful. I had increased my waist circumference to “overweight” and needed to lose 20+lbs. It was important due to having suffered two Gout flare ups nearly back to back. I was doing something wrong.

Gout is an auto immune disorder where the joints are attacked by the immune system because the uric acid in my body was high. Were my kidneys not working? Was I dehydrated? Was my liver not detoxifying my blood properly? The doctor prescribed a drug that she said would help.

I asked, “What are the side effects?”

“No I am not kidding but it’s okay, we’ll give you a powerful anti-inflammatory to counteract the inflammation.”  I knew this type of medicine to counteract the side effects of the other medicine was a slippery slope and disruptive to the digestive system in that it affects all kinds of gut processes.

I went to see a naturopath. This is not a bad idea if you don’t like pain or drugs that have side effects that worsen your condition. Listen closely to those TV commercials about that new drug with the pretty people enjoying life while the narrator tells you about the extra depression, diarrhea, suicidal thoughts the drug may cause…

The naturopath was sympathetic and was sure for about $3000 in fees and a few hundred more for in-depth testing, she could work out the kinks in my body and restore me to good a new.

Now $3000 is a lot of money for where I come from and we don’t bandy those type of numbers about carelessly. “Let me think about it.”

My next stop was conversing with a Functional Medicine Health Coach who told me nearly the same. She would also take a 2 hour health history. Map out the interconnectedness of my symptoms to my nutrition and lifestyle and it would take about three months to set me straight. OR she said, “Garey, you can join the school I am affiliated with and learn this yourself. I know you are a health coach and you got this.” I looked at the year of study, eleven courses enumerated:

It takes about a year of study if I expend 7 hours a week. The price:

Guess what I chose? Yep, I am back in school, taking a deep dive into an altogether new way to look at optimal health. I had already chosen to lose the weight. I engaged in a mind body psychological device to ensure my success. Every morning when you first begin to awake, it’s kind of a “dream” world where your brain is operating in theta. This is the only conscious stage where you have access to subconscious programming. So I began to tell myself, “179.” That’s the weight I wanted to get to in stage one. I was 186. Then during the day I adopted two methodologies. I had my coffee in the morning per usual. (This does not break the “fast”) And then I looked forward to “breaking the fast” around noon. Giving me 16 to 18 hours of “rest” to my digestive system before eating again. The bigwigs in the health coaching community call this intermittent fasting. There are many ways to accomplish this but this is the way I chose. So device #1 was to indulge myself in intermittent fasting. Device #2 was completely psychological. I look forward to my next meal using just a bit of self-discipline but not too much. In case you haven’t noticed, we humans have the power and ability to give meaning to things, feelings, events, facts. I took the feeling of being a little hungry to mean, “Dang, I am strong. I am powerful.” Rather than “I hate this sucky diet.” If I needed to, I had a green tea mid morning. But mostly, I am engaged throughout the morning, so 12 noon came rather quickly.

In 2016, a Japanese biologist won the Nobel Prize for his study of autophagy. Strange word but what it simply means is that the body recycles dead cells. In the case of the study, dead protein cells get consumed in the body and accrue the benefits of supplying the body with more protein. In other words, you don’t have to eat so much. It’s okay to do a little calorie restriction. Intermittent fasting is the lifestyle that our forebears lived before farming was thought up. Hunter gatherer. Allowing for complete digestion and rest ensures the next meal is going to be appreciated and our bodies will do its best to consume fully and complete the cycle of assimilation, conversion, uptake at the cellular level. So besides lowering my calories I upgraded my quality of intake. I kind of fell into my early morning program of “179” which then became “174” which then became “170” which then became “165” which then became “159.” That’s my number presently but the scale still says 165. I’ll tell you what my two meals a day consists of in a minute.

In addition, having signed up for the year of study, I had immediate access to the School’s library. I researched Gout, found a doctor-grade (whatever that means – maybe it’s a seriously astute medical company that only uses the best of high quality ingredients.) Uric Acid Formula from Pure Encapsulations. I take 3 capsules very religiously. The story goes: The war fighter told his physician at the VA, “I’ve been stabbed, shot, thrown out of a helicopter, but nothing hurts worse than gout.” So I don’t miss a dose, ever.

Conviction about one’s decisions are dependent on belief. What do you really believe? It’s amazing what we find ourselves believing if we don’t look out! It’s important to reassess every so often to see what is actually causing our actions, which in turn drives our results and outcomes. I started buying limes every trip to the market and squeeze a quarter lime into every cup of water I drink. More recently, through my studies, I am becoming convinced that in spite of my father having had gout, I don’t think I need to suffer this even if I am predisposed genetically. I think lifestyle and nutrition and the mind-body connection are far superior than falling prey to the idea that we can’t change our genetic expression. Notice I didn’t say “change our genes.” SNPs are genetic markers that are no different than the light switch on the wall when you enter a dark room. You can turn the lights on or off with a flick. Genes are bathed in the environment that they exist. We have an external environment that conditions us to some extent and an internal environment that is somehow influenced by our thoughts, feeling and expressions of either gratitude or displeasure with circumstances. Remember, we have the power over the meaning of things. Every bad deal has a silver lining worth looking for. My bad deal was crippling gout, my silver lining was losing weight, finding a passion for functional medicine, being healthy again!

So, upping the quality of my nutrition while decreasing quantity. My first meal of the day generally is my protein smoothie that contains protein, veggie greens, fiber, almond milk, usually a small organic Gala apple and berries. Not only is it yum, it’s very filling. The evening meal is whatever I want. Remember, I look forward with happiness to my black coffee in the morning. I look forward with satisfaction to my generous smoothie and then I eat something I love for dinner observing Michael Pollan’s adage: “Eat {real} food, not too much, mostly plants.” I added the “real” in there because much of what we now call food is rather “food-like substances”. Processed foods. Heavily sugarized processed “foods” which are not really foods. The other adage is, “If the bacteria won’t eat it neither should you.” The aisles of the supermarket are filled with these food-like substances that our bodies have a hard time discerning if this is food or a foreign invader worthy of capture and being sent to fat cells, imprisoned until the immune system can figure it out. This of course leads to “overconsumptive malnutrition.” Americans generally are overweight or obese yet deficient in nutrients necessary for optimal health. You can fake it for a few decades but eventually the compromises will catch up with you.

While in weight loss mode, I aimed for 1000 calories a day. My smoothie was about 500 calories give or take. Trader Joe’s has Indian meals that are 350 to 400 calories and I love Indian foods. So with a basal metabolic rate of 1650 calories, eating a calorie count of around 1000 allowed my predetermined subconsciously programmed weight loss number to become a reality.

If I need to graze in between my two meals I indulged myself with raw almonds, walnuts, some sort of healthy trail mix. Do not buy the trail mix that has M&Ms. That’ll crash you right into insulin resistance. This replaced the ice cream in my life. I also found these salad kits already prepared to eat. My favorite is the sweet kale, broccoli and brussels sprouts. Before you say, “Yuck”, I’d like to say don’t knock it until you try it. All these veggies are high in the good stuff you body really craves.

There is much more to share that would be helpful in how to practice a healthy, self-care style of living that is fulfilling and rewarding all at the same time. By the way, I don’t suggest you take this intensive course I am taking unless your really, really yearn for it, but rather you can pick up Jeffery Bland’s book, The Disease Delusion, which will give much more than you bargained for. The kindle ebook which can be read on any device, you don’t need a kindle, is only $8. See, there are some real bargain’s in life. My mom said, “At $3.75 you were a real bargain.”
https://fullbodyhealing.com
Facebook